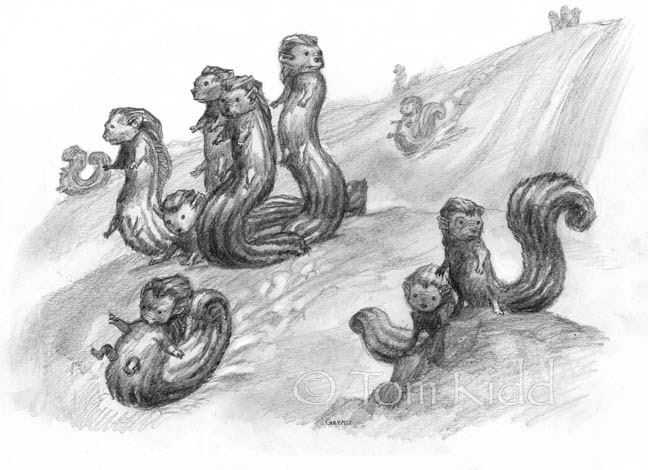 These burrowing animals live in the northern most part of Terrain where there is perpetual winter. However, that doesn’t mean that there aren’t a few nice days and that’s when the snowpeys come out to play. 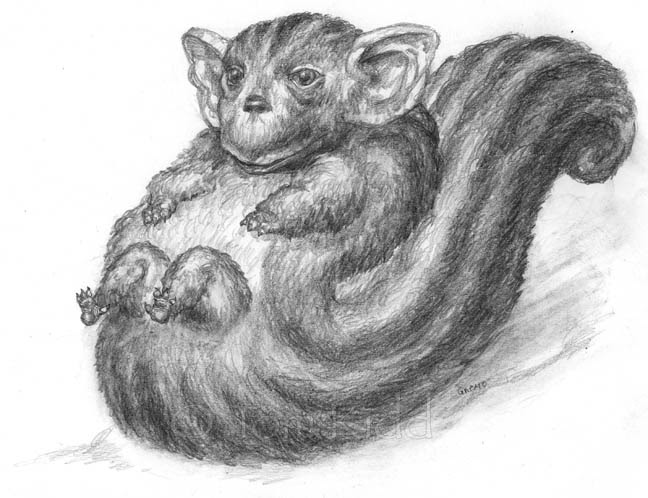 Some species of snowpeys are solitary creatures while others live in large communities. They all love sledding on their unusually long furry tails though.
Posted by Tom Kidd at 2:57 PM 3 comments: 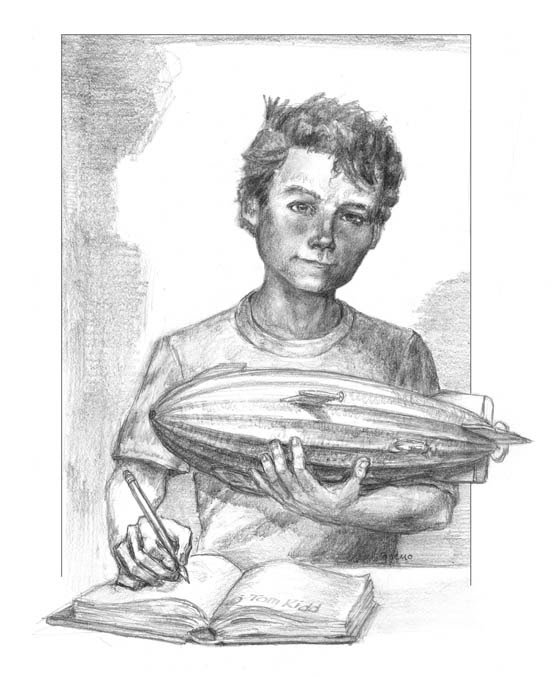 Above: Rummaging through stuff here I found this loose drawing that Gnemo did of himself. It was pretty beat up but I scanned it and I cleaned it up in Photoshop. Gnemo didn't do many self-portraits. My guess is he went to draw the model airship, looked up to notice his own intense expression reflected in a mirror and decided to draw that too. 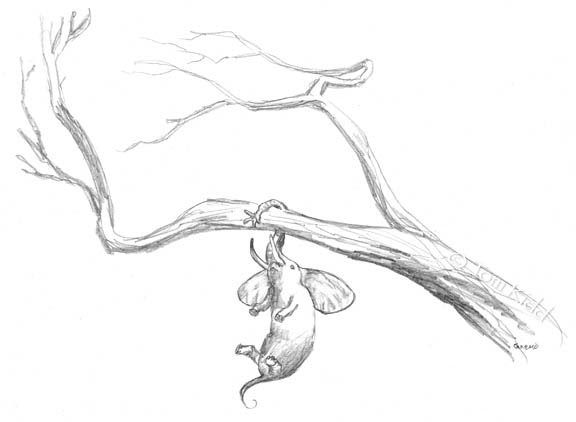 Above: Somehow this got left out of the previous posts of Marsulephants. I think that this little fellow thinks that he's Tarzan. Gnemo's note reads, "One Swinging Marsulephant!"
Posted by Tom Kidd at 5:54 PM 3 comments: 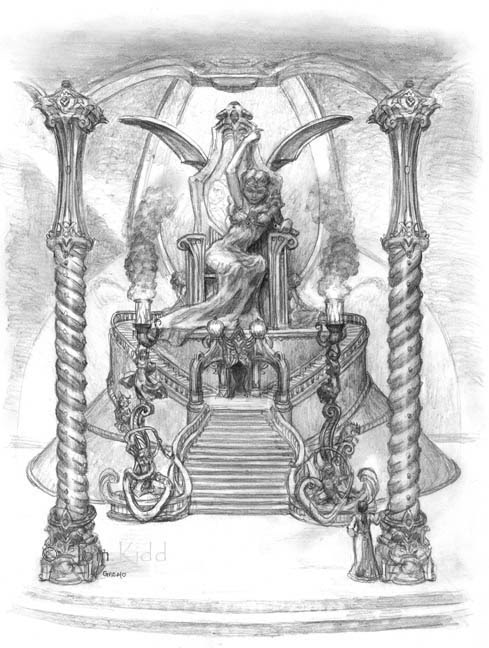 The people of Gnemo's world are a polytheistic group. They still have favorites among their many gods. This is a monument to one of the most beloved.

The world can turn on a phrase. In this giant library is held all the great quotes of history: those that brought forth an important truth and those that greatly deceived. Here students and scholars come to prepare themselves against obfuscation in all its myriad forms. This is a college for the study of language as a deadly art.

This metaphorical goddess at the entrance represents the seductive power of words as well as the beauty of clarity. Young children are familiar with the fables of this goddess. Each is a lesson taught through human foibles and shortcomings. In each tale she ultimately exposes the trickery of someone’s words with her own beautiful and succinct phrases. Those are carved into the stone of her pedestal.

You'll find it only after crossing a rickety rope bridge across a deep canyon. See: Canyon Temple
Posted by Tom Kidd at 7:47 PM 7 comments: 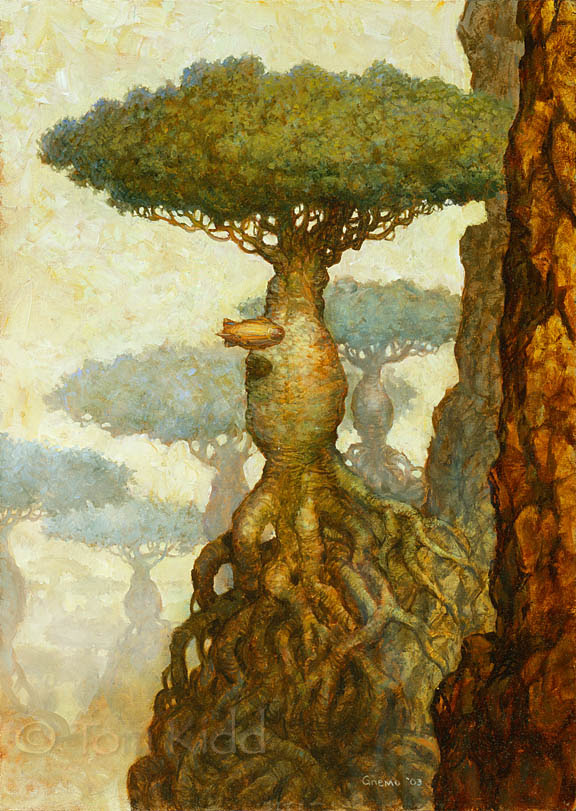 The gargantuan trees in the distanced rustled with activity. As we approached, a ring of giant animals with long snake-like noses and curved mouth-tusks took on a defensive posture. We prudently decided to keep our distance. After all, they’d never seen humans before. I sent the majority of men away and set up a small encampment equipped with binoculars and a telescope. From the spyglasses we could observe this unique natural wonder. I asked Gnemo, my artist recorder, to give them a colloquial name. After considerable observation he called the animals marsulephants and named the towering trees Booth Trees. The boy has a knack for names as well as an exquisite eye for detail. 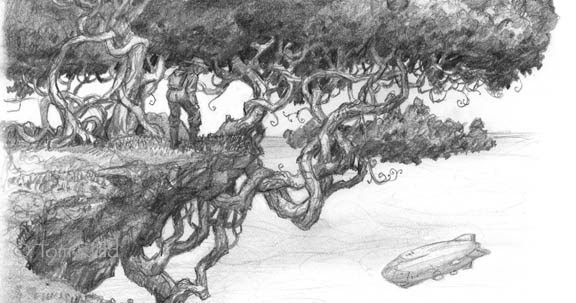 It seems that the dominate life form here were the trees. They weaved their way through every section of these islands. 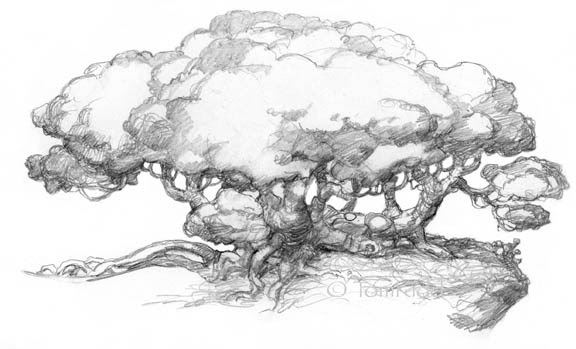 I let Gnemo have the telescope and he sat at it with pencil in hand for the long hours of the day. His sketchbooks filled with drawings and notes. Those boy’s eyes peered deep into those trees. Later he and I would take the scout blimp out for a closer look at Booth Trees growing on the upper mountain cliffs. From both vantage points Gnemo made some incredible observations and did some excellent drawings covered with meticulous notes. 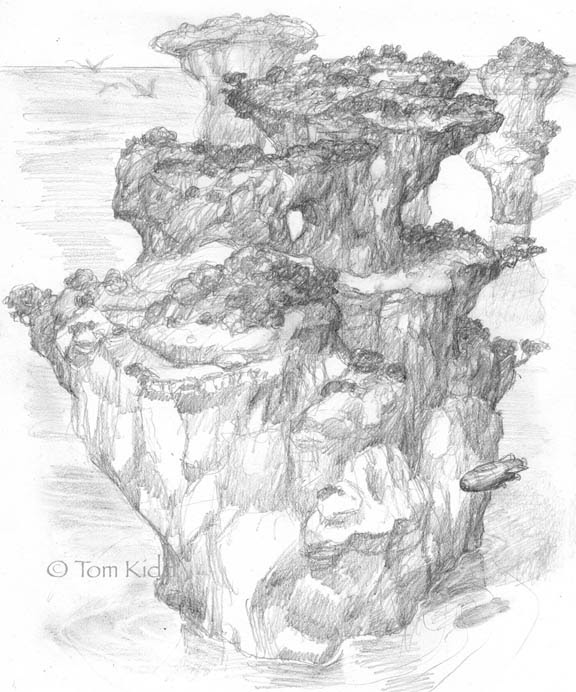 These trees live on a series of islands we've been exploring. The islands vary in size. From the look of them they seem to have popped straight up out of the ocean. 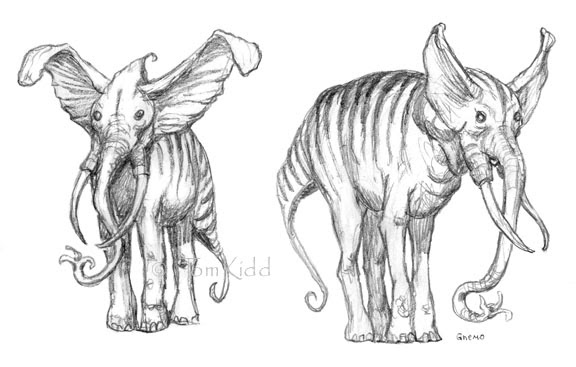 It was a classic symbiotic relationship. The marsulephants were the giant tree’s protectors and the tree provided for them. My guess is that these trees employ a similar fiber to the condos shells. Without it they couldn’t grow as large as they have. We use this carbon fiber to build our airships. It is especially strong and light. 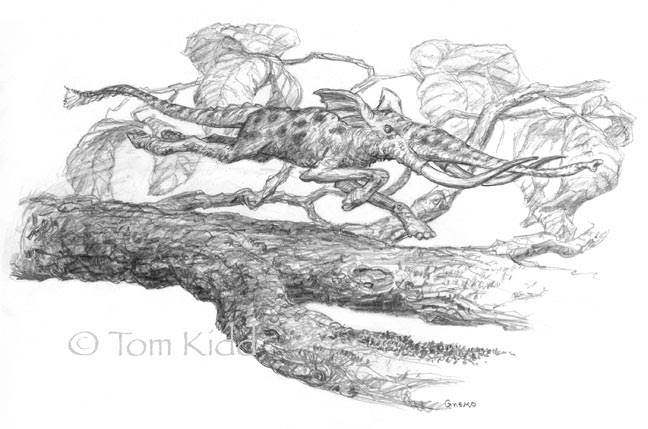 The marsulephants’ young are not fully developed when they’re born. They nurse within a pouch on their mother till they’re old enough to live on their own. It’s at that point a very strange thing happens, the parents pick up the youths in their massive trunks and they fling them into the higher branches of the trees to be caught by smaller marsulephants. Gnemo has observed this with his keen eyes and has noticed how the young ones are immediately indoctrinated into a society devoted to protecting the tree, their home and their single source of nourishment. 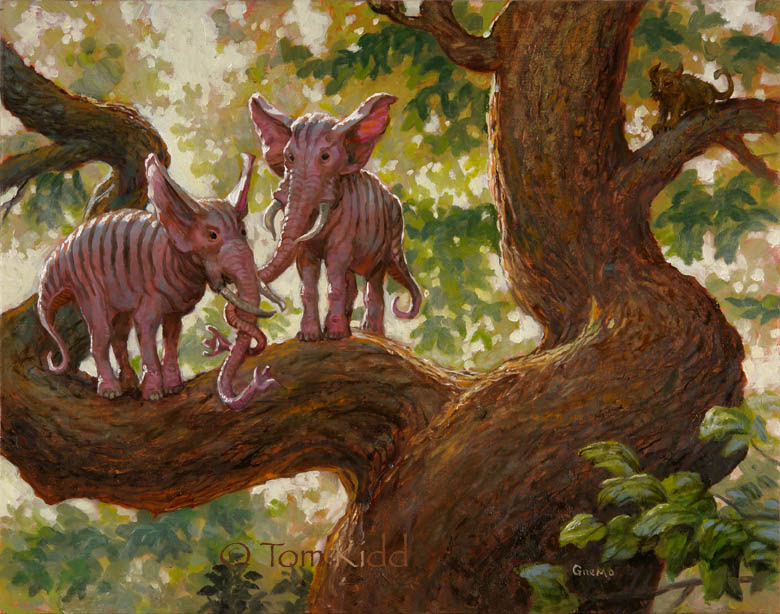 He also observed the ritual of adulthood when a marsulephant can no longer live in the tree and descends back to earth to become a parent. In what I can only call a ceremony the marsulephants gather on a single branch inching outward to its edge. Under their weight the branch slowly moves towards the ground. A single marsulephant, a particularly large one, passes by the others on the branch touching them with obvious affection as it moves down the thinning branch that by now has nearly touched the ground. With one last look at its friends it hops off the branch and waves its trunk in farewell. He or she then goes off to find a mate that from separate Booth Tree tribe and joins that tribe or brings back its mate. 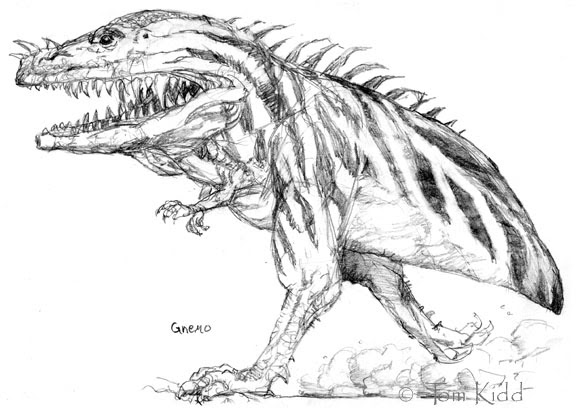 We were fortunate to see a battle between marsulephants and a creature we call a slitherscarr. A large group of them attacked the tree with their razor sharp teeth to get at its rich sap. There are special pockets that the tree produces that only the large marsulephants can reach with their long trunks but the predatory slitherscarrs tear into the tree to steal the sap. Several were caught by the marsulephant and trampled. Fertilizer for the tree I suppose. 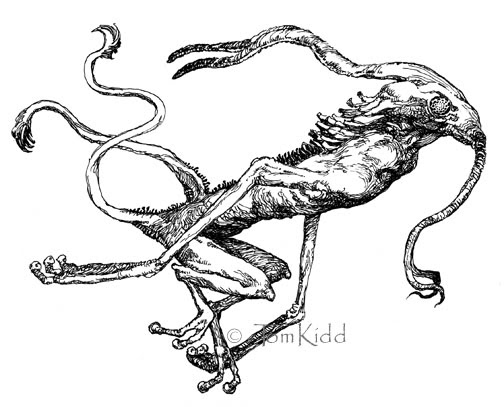 Gnemo also observed other animals living in the Booth Trees, like the skullduss, an egg laying predator that the tree provides nests for. It’s especially good at consuming small leaf eating pests but occasionally attacks a small and weakened marsulephants. Their favorite snack is a fuzzum. The fuzzums try to stay near the marsulephants who have a general dislike of the skullduss for obvious reason and will attack them if they approach. 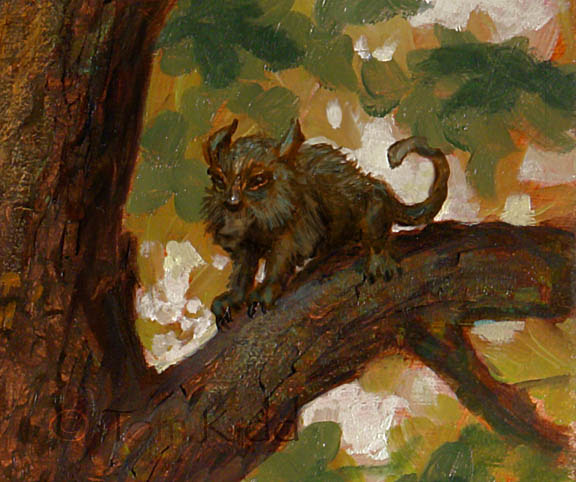 Other creatures living in these trees are grittons and wormwalkers. You can see them below respectively. 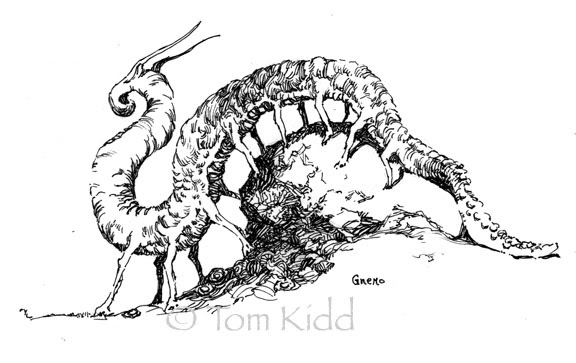 Deeper into the jungle is a network of ponds that are held with in trees high in the mountains. We boated and portaged our way through them. These trees are likely related to the Booth Trees. 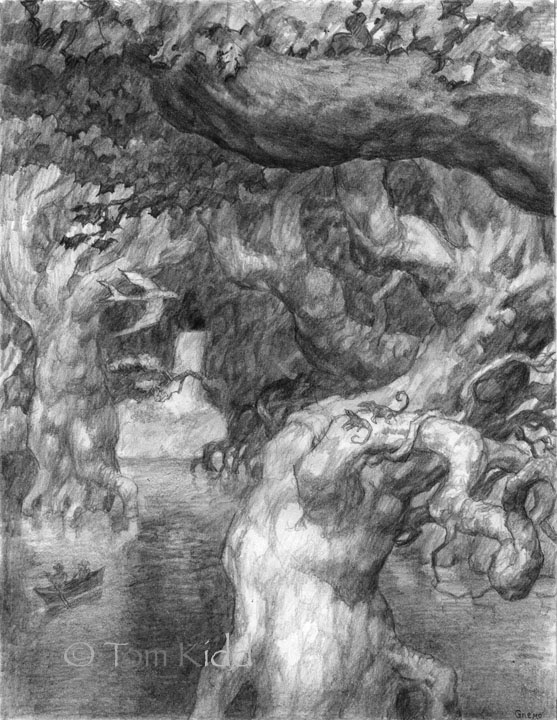 The close-knit society of the marsulephant was endearing to observe. We named each individually and Gnemo and I were sad to leave them but we have Gnemo’s pictures to remember them by. He even climbed a tree and did a little portrait of myself and Ensign Peric at the roots of a young Booth Tree. 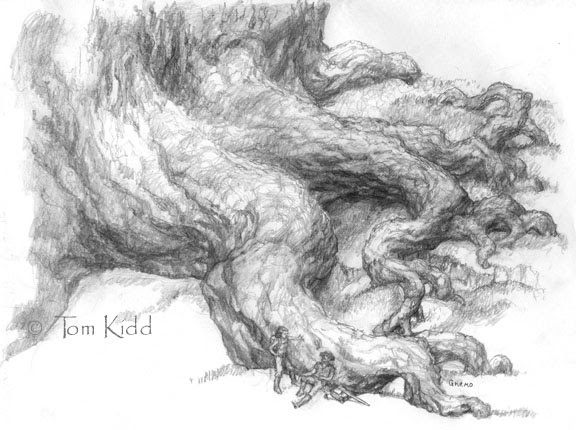