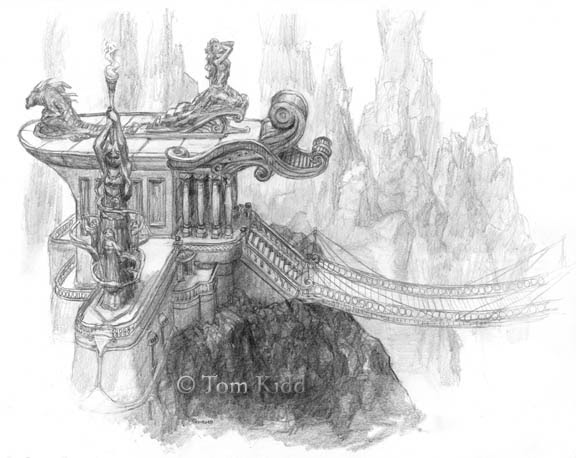 A great advantage of polytheistic cultures is the all the wonderful and varied temples that are built. Every god needs a home and it needs to be one that truly honors the god. Here is one of the many drawings of temples you’ll find in Gnemo’s sketchbook. Not that it’s important to appreciate the art but these people are actually metaphorical polytheists. I felt the need to be specific because it does make a difference in the story if not the art.

One thing I wonder though, with all the work they did on the temple, why did they built a flimsy rope bridge instead of a stone one? Perhaps constructing a loose and swaying bridge over a perilously high cavern to reach the temple emphasizes the firm power of the god within. I should post the interior next.
Posted by Tom Kidd at 12:57 PM 3 comments: This is a new beginning. The title link above will take you to the low resolution and full color version of Gnemo’s Journal on my website (around 20 pages at this point). If you have a problem linking to it, as a couple of people have complained about, it’s because your internet security is blocking the site. You may have to turn it off. If you know how I can fix this problem with my server, let me know.

I’m working on a higher resolution version of the sketchbook/journal that can be read much easier. You’ll likely find it frustrating though if you don’t have a large monitor and a fast connection.

Instead of pages from the sketchbook, I’ve decided to use this blog to put up newly “found” Gnemo art. It’ll be mostly drawings with the occasional painting. When I add new pages to the sketchbook I’ll make an announcement here.

It’s time to put up some architecture. You might think I’d get tired of doing these cityscapes but I never do. If I had my way I’d replace the rectangular glass blight I see in too many cities with something more inspiring.
Posted by Tom Kidd at 3:13 PM 2 comments: 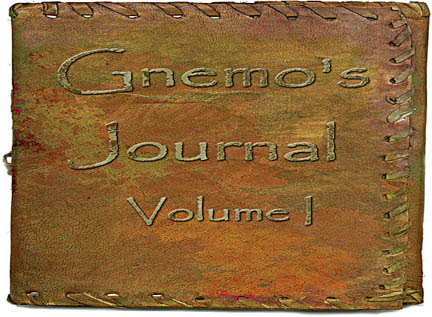 One of Gnemo's actual sketchbooks but with embossed type added (above) 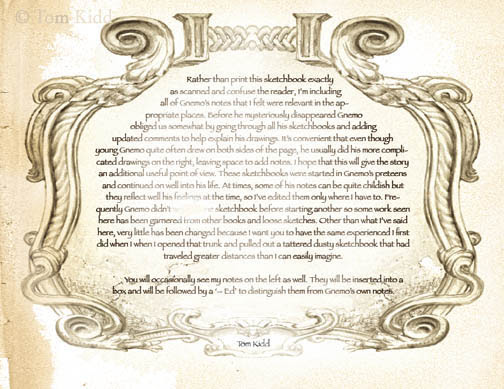 Introduction To Gnemo Sketchbook (above): Rather than print this sketchbook exactly as scanned and confuse the reader, I’m including all of Gnemo’s notes that I felt were relevant in the appropriate places. Before he mysteriously disappeared Gnemo obliged us somewhat by going through all his sketchbooks and adding updated comments to help explain his drawings. It’s convenient that even though young Gnemo quite often drew on both sides of the page, he usually did his more complicated drawings on the right, leaving space to add notes. I hope that this will give the story an additional useful point of view.

These sketchbooks were started in Gnemo’s preteens and continued on well into his life. At times, some of his notes can be quite childish but they reflect well his feelings at the time, so I’ve edited them only where I have to. Frequently Gnemo didn’t finish one sketchbook before starting another, so some work seen here has been garnered from other books and loose sketches. Other than what I’ve said here, very little has been changed because I want you to have the same experiences I first did when I when I opened that trunk and pulled out a tattered dusty sketchbook that had traveled greater distances than I can easily imagine.

You will occasionally see my notes on the left as well. They will be inserted into a box and will be followed by a ‘– Ed’ to distinguish them from Gnemo’s own notes. 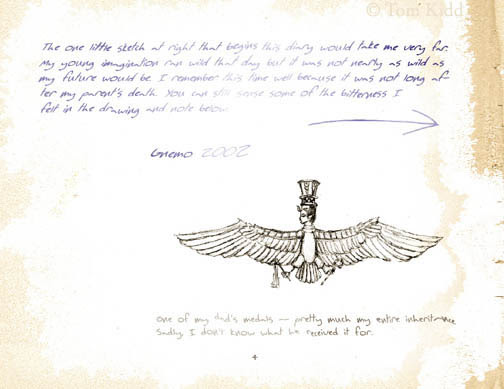 GNEMO'S CAPTION (above): The one little sketch at right (at right in the sketchbook but below in the blog -ed) that begins this diary would take me very far. My young imagination ran wild that day but it was not nearly as wild as my future would be. I remember this time well because it was not long after my parents’ death. You can still sense some of the bitterness I felt in the drawing and note below.

One of my dad’s medals -- pretty much my entire inheritance. Sadly, I don’t know what he received it for. 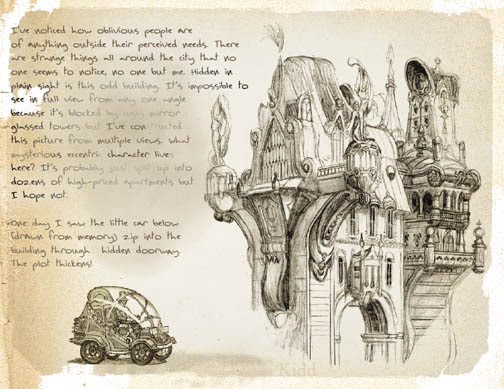 GNEMO'S CAPTION (above): I’ve noticed how oblivious people are of anything outside their perceived needs. There are strange things all around the city that no one seems to notice, no one but me. Hidden in plain sight is this odd building. It’s impossible to see in full view from any one angle because it’s blocked by ugly mirror glassed towers but I’ve constructed this picture from multiple views. What mysterious eccentric character lives here? It’s probably just split up into dozens of high-priced apartments but I hope not.

One day I saw the little car below (drawn from memory) zip into the building through a hidden doorway. The plot thickens!

NOTE ON BACK OF SKETCH: As I added the finishing touches to this sketch from my balcony Peale’s telescope found me and I would soon find Peale. At first I thought it was an accident but I’d ultimately find out it was not. From my present time I can look back and say that my great adventure began this day. My childish comments are especially naive in retrospect. 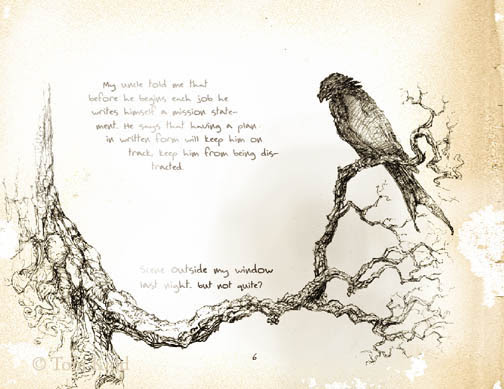 GNEMO'S CAPTIONS (above): My uncle told me that before he begins each job he writes himself a mission statement. He says that having a plan in written form will keep him on track, keep him from being distracted.

Scene outside my window last night, but not quite? 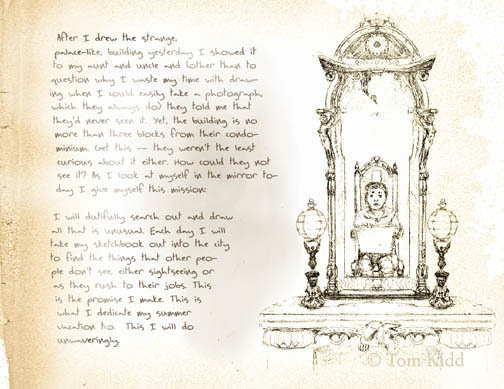 After I drew the strange, palace-like, building yesterday I showed it to my aunt and uncle and (other than to question why I waste my time with drawing when I could easily take a photograph, which they always do) they told me that they’d never seen it. Yet, the building is no more than three blocks from their condominium. Get this -- they weren’t the least curious about it either. How could they not see it? As I look at myself in the mirror today I give myself this mission:

I will dutifully search out and draw all that is unusual. Each day I will take my sketchbook out into the city to find the things that other people don’t see, either sightseeing or as they rush to their jobs. This is the promise I make. This is what I dedicate my summer vacation to. This I will do unwaveringly.
Posted by Gnemo's Mission at 7:32 PM 2 comments: