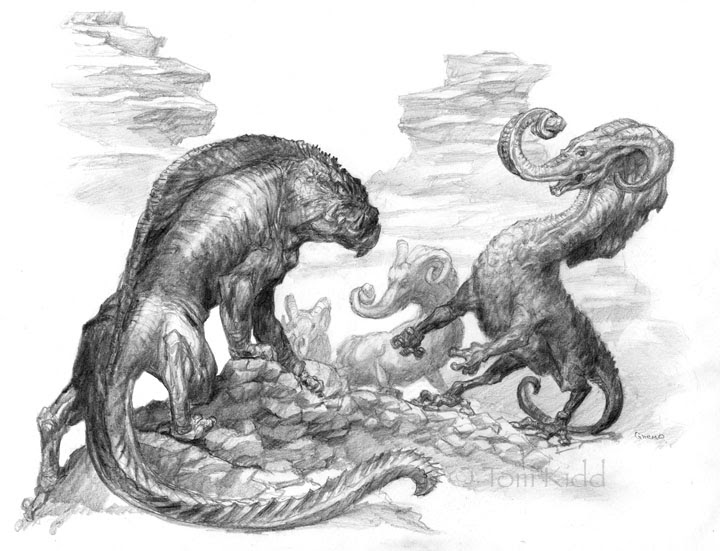 Young predators are in a big surprise if they think these creatures are easy prey. Once pummeled by these rock-throwing mammals a prowler is not likely to forget the experience. Living on a mountain of stones, an endless source of ammunition, the Rock Lobbers are the dominant species.

Besides throwing rocks, the Rock Lobbers also use their prehensile noses to capture insects, find water and as whips against smaller trespassing animals. Normally they wouldn’t advance as closely to a predator as seen here. The forward Lobber has been pretending to be lame to lure a hungry Grindhundt away from a hidden nest. The ruse has worked and the Grindhundt, despite his armored skin, is about to receive some hard knocks.

By the way, I’ve updated and corrected an earlier entry here. I do my best searching through Gnemo’s notes and drawings but sometimes I make mistakes. The full understanding of something may not be revealed along with a drawing but will be contained in later notes. This is something of a puzzle with many missing pieces. I have to guess what some of the missing parts are and sometimes my guesses are wrong. So now, Godandreas has been renamed. It is now Chwotashun and the story behind it is considerably more interesting. Scroll down.
Posted by Tom Kidd at 2:20 PM

I absolutely love Gnemo's work. I've been following his work for some time and I'm so happy that I've stumbled up this blog! This is such a rich world!

I wonder how close had to be gnemo to this scene to make this drawing, awesome!